NEW PAPER: The AI Creation Meme: A Case Study of the New Visibility of Religion in Artificial Intelligence Discourse

Through a consideration of examples of the AI Creation Meme, a remix of Michelangelo’s Creazione di Adamo featuring a human hand and a machine hand nearly touching, fingertip to fingertip, this article will tackle the religious continuities and resonances that still emerge in AI discourse in an allegedly ‘secular age’. 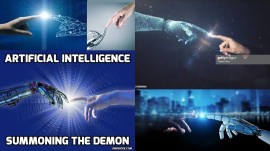 The AI Creation Meme, as a highly visible cultural artefact appearing in a variety of forms and locations, will be analyzed and discussed for its religious, apocalyptic, and post-humanist narratives, along with reference to earlier work on the New Visibility of Religion—specifically, Alexander Darius Ornella’s consideration of the New Visibility of Religion and religious imagery of the 2006 film, Children of Men. Work that outlines the aspects of critical post-humanism, speculative post-humanism, and transhumanism in relation to the contemporary post-secular age will also be addressed to expand on the implicit apocalyptic messages of the AI Creation Meme. Such a consideration of repeating and remixed imagery will add to the scholarly conversation around AI narratives and the entanglements of religion and technology in our imaginaries of the future.